The Lozier Motor Company produced luxury automobiles from 1900 to 1915 in the United States. The company was founded in Plattsburgh, New York and remained in business until 1915 when it declared bankruptcy.

will set a new record in the sale of $5000 cars for men who know automobiles and who can afford to take advantage of their knowledge are satisfied with nothing less than Lozier quality. And Lozier quality in its entirety-mechanical precision, power, luxury and comfort is found only in Lozier cars. And only in Loziers, too, are found several real 1913 improvements which two or three years from now will be standard construction with all high grade cars. If you want the one car in which you can feel the pride of exclusiveness, the pride of the best there is, this is the car. Left Side Drive Center Control 80 Actual Horse Power Lozier leadership was never so firmly established as it is today and the whole spirit of the Lozier organization is this: To sacrifice not a single detail of the Lozier. Methods which have made Lozier motors and Lozier car famous the world over, but by aggressive manufacturing policies to make possible a larger production of Lozier cars, so that men who want Lozier quality may be able to secure it, The Lozier continues to lead all American motor cars, with no other builders sufficiently endowed with ideals and experience to combat its leadership. A leadership which will be still further strengthened by another model which is to be added to the Lozier Line in November.

Heres one from the new York Tribune in 1914

LEFT HAND DRIVE INDORSED “‘Believing that popular taste had reached the point where a closed car of the Berlin type, with left hand drive and center control as features, would meet with approval, we placed a car designed along these lines on sale” in the early part of the last winter. The success of this car worked out some what differently than we had reason to expect, for not only did the closed car meet with immediate favor, but demands for touring models with left hand control were soon , arriving fat our offices. This led to our serious consideration of adopting the left-hand drive on all our models, and we have , at length reached the decision to market only cars of that type in the future, beginning with our 1913 type 72. “We believe that by using the left 7 hand drive, the final solution of the j fore door problem has been found. When we first introduced this type of body in America, designers were confronted with the task of placing the operating levers on the chassis in such a position as to be easily accessible, and at the same time in harmony with the lines of the body. In adopting the torpedo “body, various makers ‘ have; marketed cars, some with the i quadrant containing the levers on the outside of the doors, and others with 7 the operating devices inclosed, but. all have been found unsightly in appearance or difficult to manipulate. . By moving the steering wheel to the left and the levers to the center of the car, ye have succeeded in keeping operating mechanism in the same-relative position to the driver as before. This also makes possible the construction of flush side bodies – of pleasing appearance, and is another step toward the clean design which is constantly sought after by the progressive makers of motor cars.

Here the first ad above as a collectable vintage automobile print – 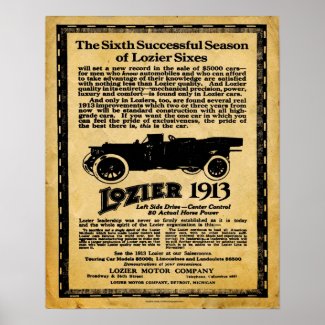