The Hupp motor car company sold cars from 1909 thru 1940 and was started by two brothers, Louis and Robert Hupp.There is more on R.C Hupp below.

They were fairly successful up until the depression era which led to the demise of many of the hundreds of car companies in the early 1900’s. Here are some of the better preserved advertisements and some of their accompanied text as seen back in the day.

Here is text that followed for The Hupmobile ad below –

Long Stroke 9 means Long-Stroke in the New Hupmobile – we have figured always that it was the wisest kind of enlightened to give more than the public expected. Thus, only one motor in America has a longer stroke than the engine in the new Hupmobile “32.” .

R.C. Hupp – Eight years ago Robert Craig Hupp knew nothing of the manufacture of automobiles. But he had an unconquerable determination to find out.

Today he is the moving spirit in eight sound Detroit companies — three of them producing motor driven vehicles — and the only man at the head of an automobile plant who has risen to his place from a mechanic’s job in the shops. R. C. Hupp foresaw the possibilities of the automobile Industry when he was 25 years old. By the time he reached that age he had been in the retail coal business, had engaged for a time in chemical manufacturing and had turned to the freight end of a great railroad system.

But he had never been satisfied. He felt that to make the sort of success that would satisfy himself he should go into some line where he would have the opportunity to learn the business from the ground up, inside and out. The automobile was new and it seemed to hold forth the brightest promise so in 1902 Hupp went into the shops of the Olds motor works.

For years he worked at the bench and grounded himself in the mechanical department of the business. Then came an opportunity to go into the office and it was welcomed. Here he came into contact with all departments and all phases of an intricate business. His experience with the Olds works covered a period of three years, and in the autumn of 1905 he left and went to Chicago.

Nine months later he returned to Detroit and became a member of the Ford organization. Until January, 1908,. he remained with the Ford company and left to become the organizer of the new company.

In the years that had passed since he entered the industry Hupp had come to have some ideas and plans of his own. He had never had a free hand to put them into execution and In his new connection was restricted as much as he had been theretofore. But for this there might never have been a Hupmobile.

Play a period tune below – Edward Meeker – The Argentines, the Portuguese and the Greeks – 1922

Audio clip: Adobe Flash Player (version 9 or above) is required to play this audio clip. Download the latest version here. You also need to have JavaScript enabled in your browser.

R.C. HUPP’S STATEMENT “Emphatically, I again say, I can positively build the EMERSON TOUR (the lowest priced 110-inch wheel base 5-passenger car in the world) to sell for $395 and make $69 profit on each car, the profit on which we figure our dividends.”

Buy a Hupmobile reproduction print at our Zazzle store –
(What are those women doing in the back seat?) 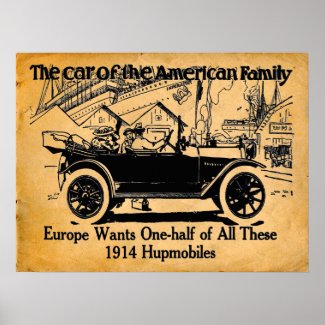